My interest started back in the days of the Home Service on the wireless, black and white television with just two channels and the 60's hope of peace and love. I was already a nerdy pre-teen kid when I got my first weather station at the age of 10. I had been interested in electronics for a couple of years (I started with the Philips Electronic Engineers kits when I was 6) and loved the Ladybird books of lights, bulbs, magnets, batteries etc so playing (experimenting) and exploring what was inside TVs and radios.

One Christmas I was browsing the toys in Hamleys in London and I spied the Triang weather station and I asked Santa if I could have one (actually I asked my dad as he had taken me there). It had a simple rain gauge, thermometer, wind speed and direction and a sling psychrometer for measuring dew point depression. It had charts for converting wet bulb depression to humidity and sample log sheets for recording the daily readings. 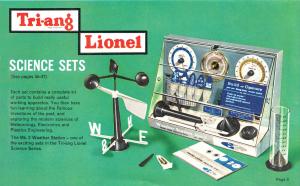 The anenometer was a three cup style instrument which generated a pulse once evey rotation. There was a small battery operated flasher which when you pushed the button allowed the bulb to flash at each rotation of the cups. Using a watch with a sweep second hand you counted the flashes in one minute and then looked up in the manual what the wind speed was. This was fine for low speeds but high winds meant you had to count very quickly.

My first electronic weather station was a LaCrosse model with an LCD console. It had a USB connection to enable downloading the data to a PC and updating a simple weather web site. Construction of this station was low cost (cheap) and after a few years it was starting to become a litle bit unreliable plus I wanted to add some additional sensors for measuring solar radiation and thunderstorm activity. The Weather Display software I was using allowed additional sensors to be added to the main station data. To do this it required the Dallas Semiconductor one wire sensors which were duly purchased from Hobby Boards in the US.

Eventually the LaCross gave up altogether and I splashed out on an Oregeon Scientific WMR200. This is a much more substantial device and lasted a good few years until very strong winds in 2015 when it suffered irreprable damage. It also required me to leave a PC running all the time in order to upload the current conditions to the web site which is a bit of a waste of electricity and means tying up a computer all the time.

Recently the Raspberry Pi computer and the Arduino microcontrollers have become very popular with computer, electronics and ham radio enthusiasts. I decided that I would investigate using these to build a new weather station. I've had many hours playing with these devices both for weather and radio related projects. There is another chapter on these projects which detail each sensor.

Whilst browsing Amazon I happened upon the weather station I now use. It is the Weather Stealth station which does not have a console but feeds its data directly to the internet. I had decided to change from Weather Display software to WeeWX which is open source and runs on the Raspberry PI. It is designed to be extended so it can be adapted to new stations or sensors. It is this software I now use in conjunction with some web software I have written to display the data on this Maghull.org.uk web site.